Sometimes you make the right decision,

We are here to help you

Sometimes you make the decison right.

We are here to help you

Aruvadai psychological support services emphasizes on harvesting the healthy mind and desirable behavior among people from diverse backgrounds since september 12, 2018. Aruvadai focuses on providing psychological support services through training programs, counseling and Psychometric assessments which is carried out mainly to implement 3 crucuial C's.

Through training program we provide learning experience for the people to enlighten their self enhancement skills and bring out positive Change in their behavior.

By using therapeutic techniques we would like to offer counseling services for people to take Choice. It drives them to explore all the possibilities and move them towards reaching a right destination in order to achieve their desired goal.

The process of psychometric assessments helps us to identify and evaluate the intensity of their problems. The paper-pencil testing provides a broader understanding of their personality and severity of their problems. It motivates them to take personal Control which creates a path to look out for the solutions objectively. Aruvadai is the right place for people to take the right decision to move towards right directions.


The paradigm shift in thoughts, feelings and behaviour due to encountering various life challenges which keep us changing our coping strategies. This interupts our personal and professional functioning. Although our mind is a form of energy that captures and rewind the negative incidents effortlessly. Ultimately this forms a part of our belief system that continues to be traces of problems and thwart us to thrash out the problems immediately. So it is important to tune our thoughts, behavior and perception which could have influenced by environmental factors. henceforth the ultimate motto of Aruvadai is to

In essence, aruvadai strives to transform highly sensitive people into highly self acualized people. Eventually it helps them to grow and evolve emotionally and behaviourally in their personal and professional lives.

"It was a great success working with Aruvadai for my community organisation program “love them and protect them- end child sexual abuse”.The way a resource person and founder of Aruvadai Miss Mridhula took over the session made it interactive and informative. Thank you aruvadai for such an awesome support.
- ManiMozhi Social worker

" It is the review of me and my partner as a whole. First of all it was more comfortable for us to share our deep thoughts about us and problems in our relationships. it was more useful for us to understand what was the real problem between both of us and some suggestions to strengthen not only our relationship buit also to grow as an individual.. It was a nie experience.
- Vignesh Ravi

Henceforth, it is evident that people who approached Aruvadai felt completely happy and satisfied with our training and counseling services. It also shows that aruvadai can bring out massive impact on people's lives in all areas of their personal and professional development.

A practicing counseling psychologist who has varied experiences in working with children and adults. She completed masters in counseling psychology . Her motivation was never ending as she also done Certificate course on current trends indevelopmental disability, advanced diploma in NLP and diploma in Montessori solution focused brief therapy, cognitive behavior therapy and dialectic behavior therapy. Through ARUVADAI she started off her career in private practice where she provided couple counseling by using therapeutic techniques.

ARUVADAI is guided by the mission to offer professional psychological services in different ventures by training specific population like students, parents and teachers. This is culminated by conducting training programs on safe touch, unsafe touch and child sexual abuse in several places such as bharathiya vidhya bhavan school, happy homes orphanage, mithra-rehab for children with disability and government schools. she had also interned with hospitals like STanley government hospital, Psymed psychiatric hospital and wisdom deaddiction centre. She is the facilitator and is willing to travel to offer the training. Initially worked as a Counseling psychologist in Mind-cafe and Student counselor in punjab associations adarsh group of schools. She was intern in psymed and wisom hospittals, YRG Care, and Nirmala sishu bhavan. the love of research has brought her a best paper award in International conference on “Parenting styles: Its influence on internet usage among young children”. Her vision is to provide holistic mental health services.

Paper publication:
“Parenting styles: Its influence on internet usage among young children”.
" The effect of love styles on hope and marital attitude"

Events Conducted By Us 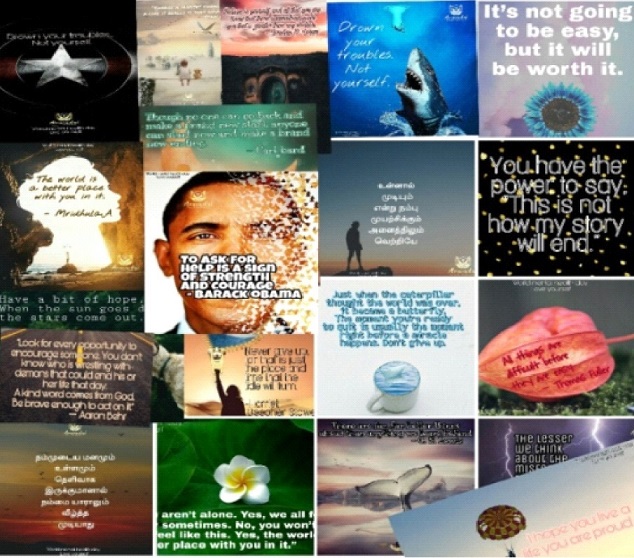 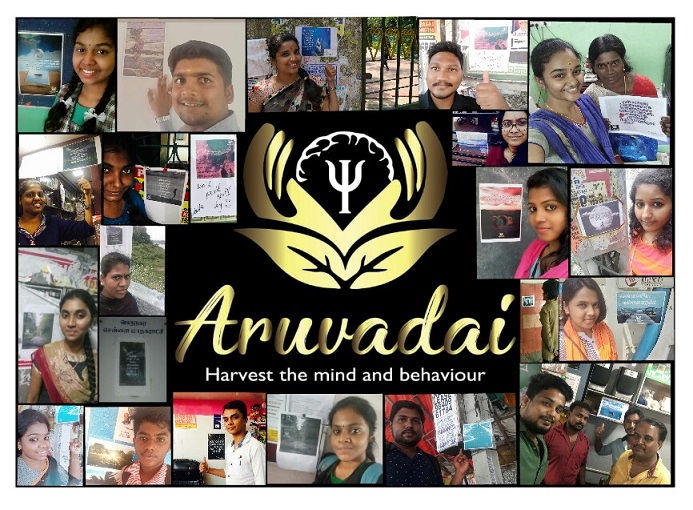 Every year world health organization follow a theme as part of World mental health day. Likewise, in the year of 2019 also they had formulated a theme which was on “YOUNG PEOPLE AND MENTAL HEALTH IN CHANGING WORLD. Healthy young adults are the significant contributors to the workforce, their families and communities and society as a whole. Being a responsible citizen, it is our duty to create a happy and healthy environment for the students to grow and evolve personally and professionally.


Keeping this in mind, ARUVADAI – Psychological support services had a vision to prevent mental distress and promote mental resilience for young people across the city. Through the statistics, we came to know the rate of suicides had been increased among the students from diverse backgrounds since 2014. Shockingly, Chennai ranks the top in suicides that are been involved by Young population. Considering these findings, On behalf of ARUVADAI – Psychological support services, a team of youngsters have decided to do an innovative act and that would bring out positive impact on mental well being among people all over the city. As an initiative for mental health awareness, we started to prepare posters which was carried on positive affirmation quotes connoted to suicide prevention. With the help of energetic and enthusiastic youngsters, we posted the quotes in 50 different places of chennai to public's notice where suicide has happened so far and in places that are vulnerable to invite suicidals. The places include Bridges, railway stations, Schools, Tea shops, Bus stands, Super markets, Petrol bunks, Hospitals, Residential Areas.


A step further ahead, we apporoached the people randomly and asked them how do they feel while they look at these posters in some public places. With their permission, we recorded their response in a video to create a platform for others to know the importance of mental well being. The public’s response to this event was very well recognised and appreciated. They felt that this should be done in entire state to prevent suicide among young minds. On a positive note, they suggested that talking to themselves positively and productively is a way to seek out solutions for all kinds of problems. 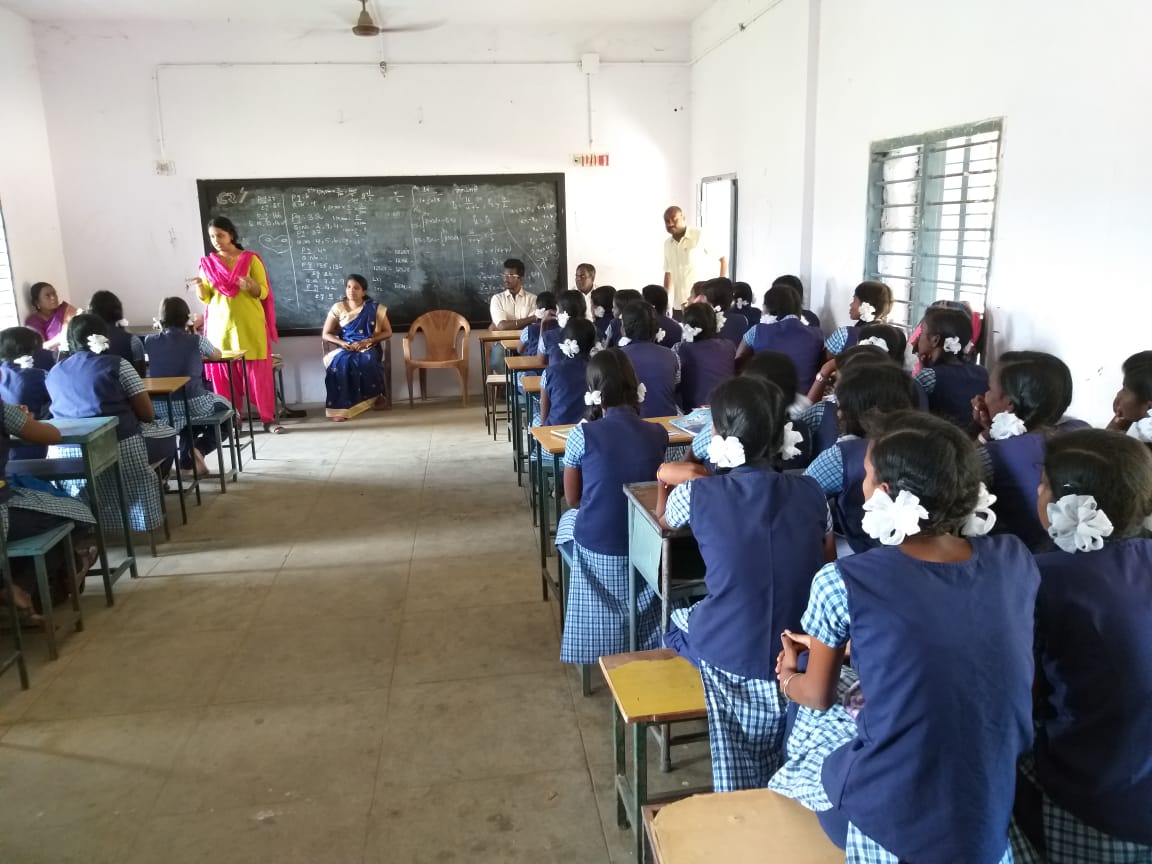 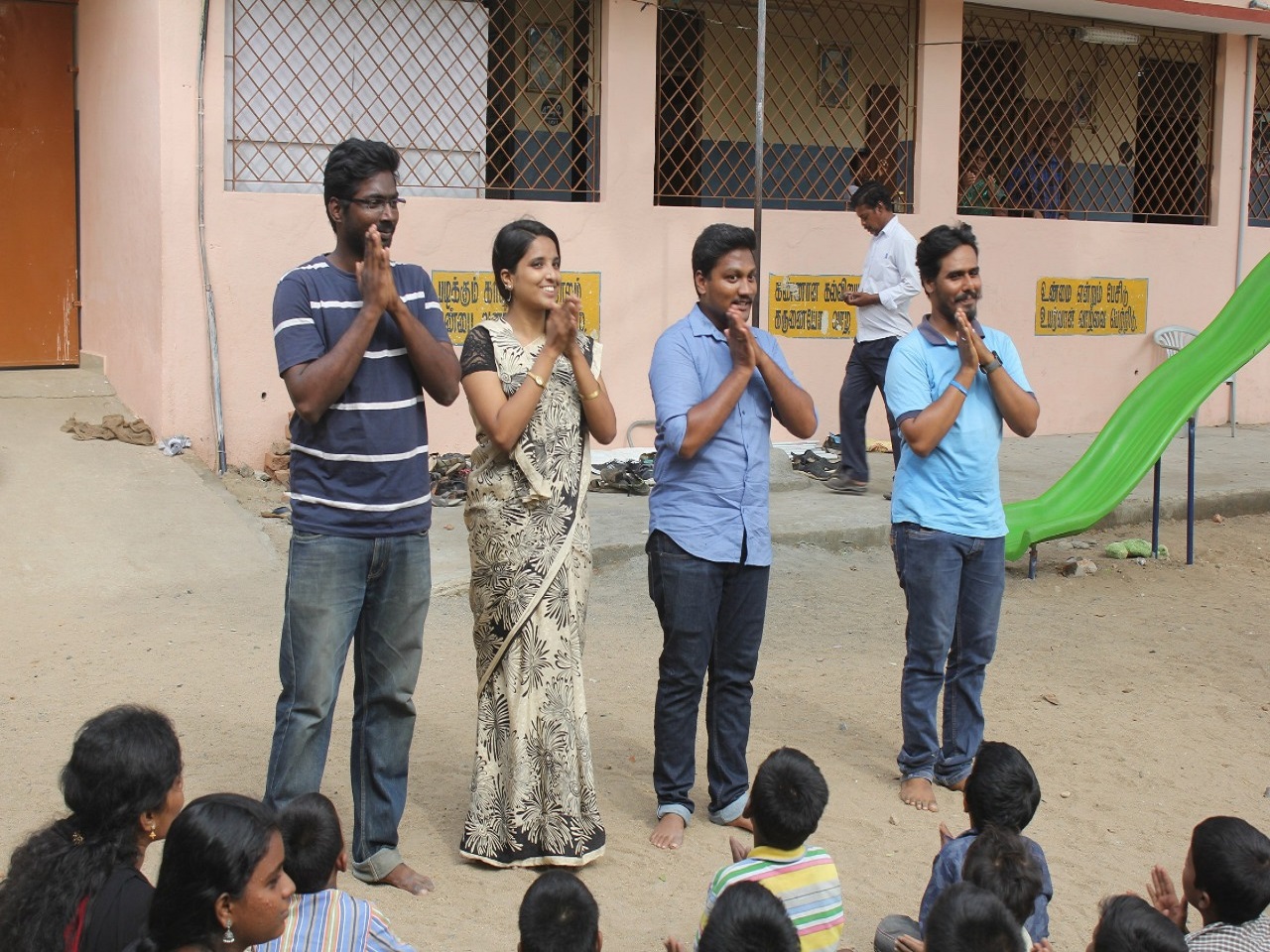 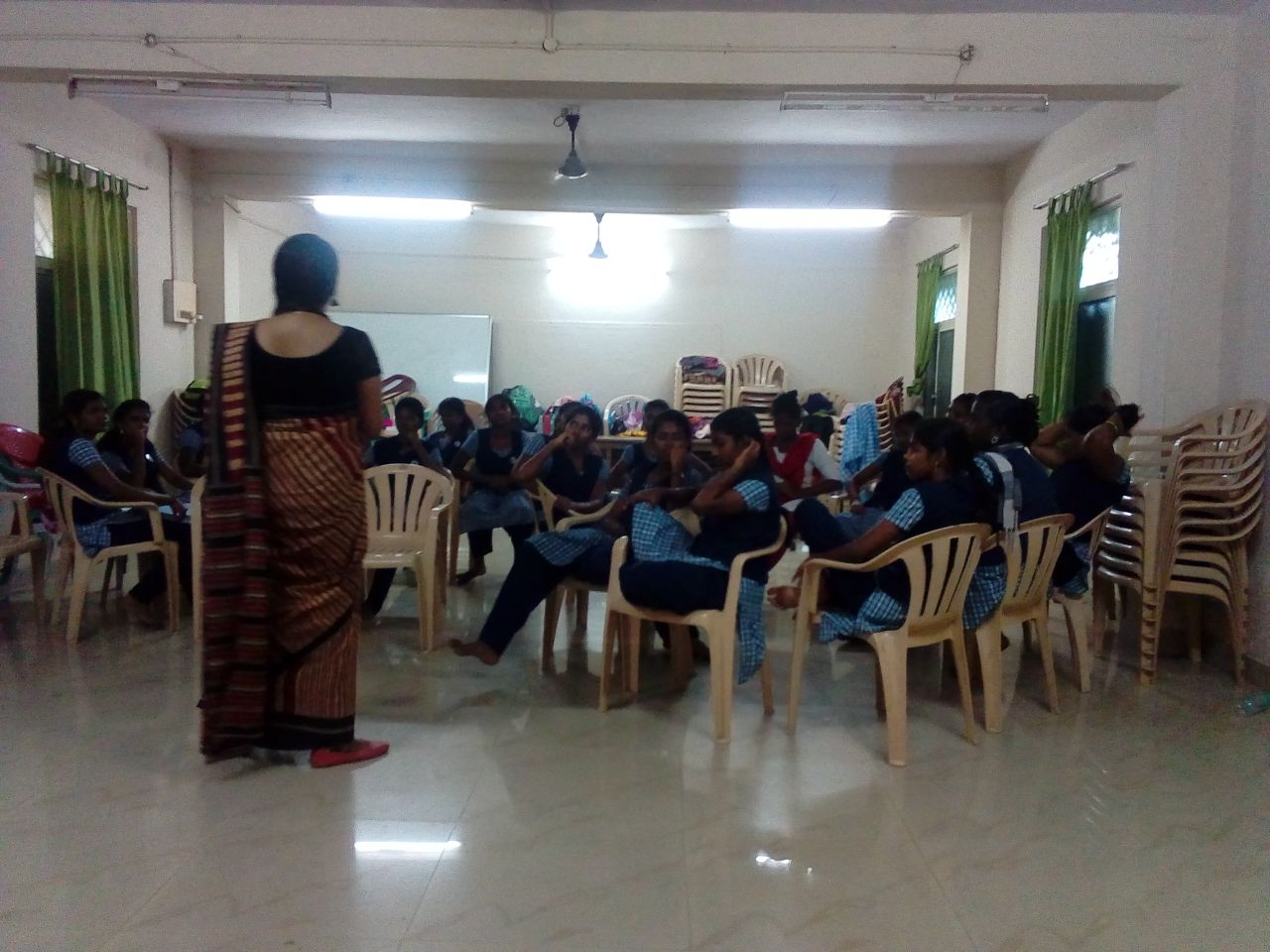 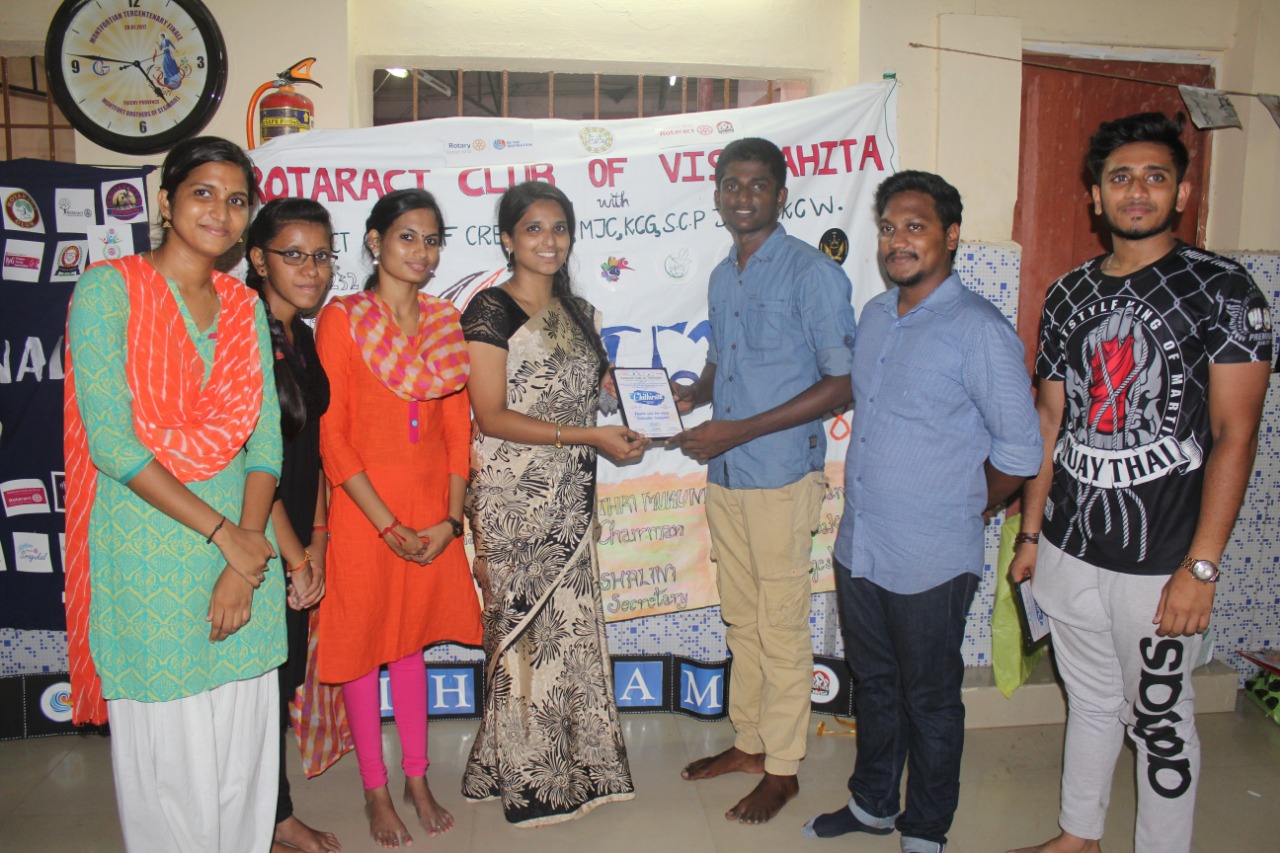 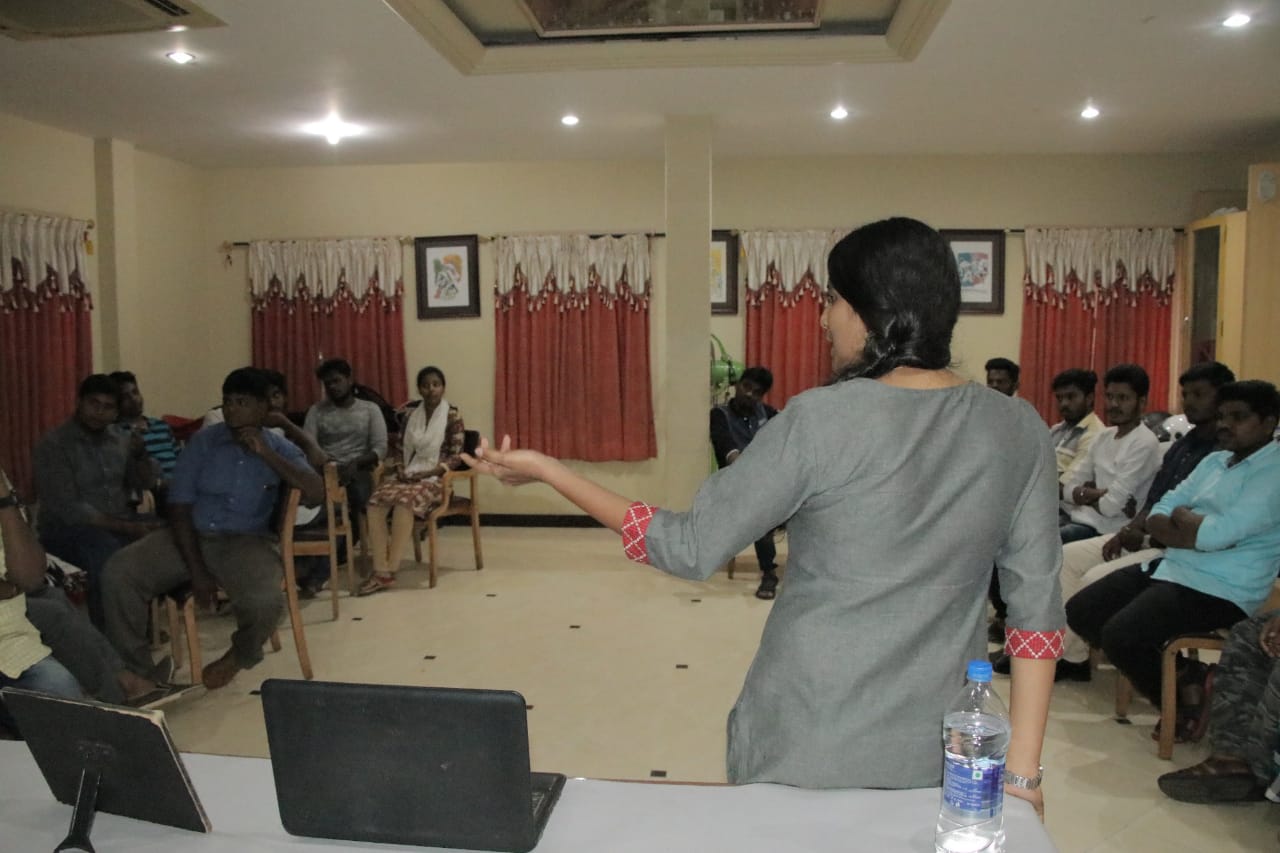 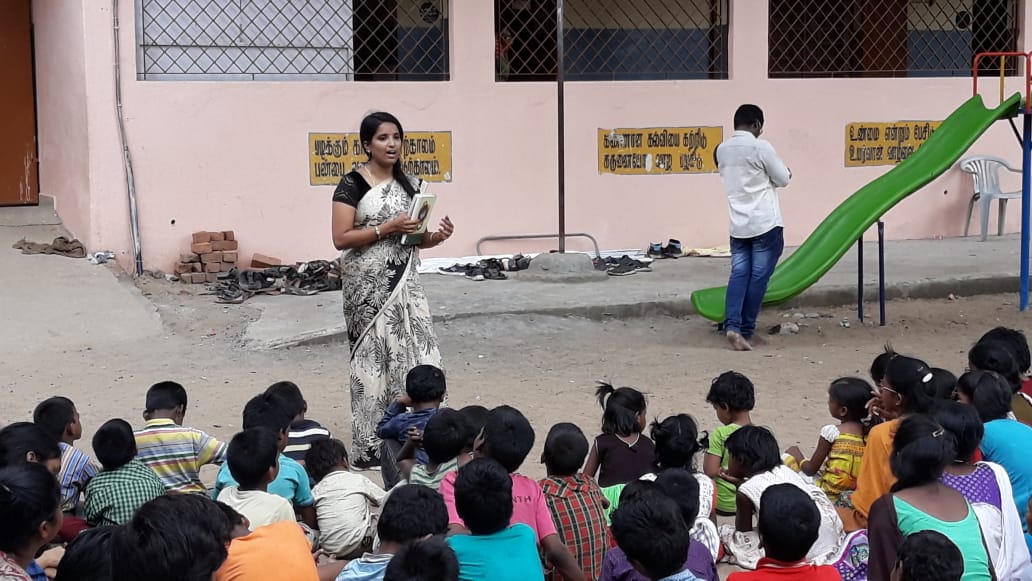 The child sexual abuse is rapidly increasing day by day across the city irrespective of age, gender, education, social and family status. More than 50% of children were being abused in india. Educating the child about sexual abuse by differentiating safe and unsafe touch leads to ambiguity about themselves and afraid of society too. It is our responsibilty to provide safe and secure environment for young children. By holding this conviction, ARUVADAI started to educate and empower the children on safe and unsafe touch in government schools. The importance of safe and unsafe touch was conducted on government schools because most of the children are from low socio-economic status where their parents are not educated to aware of the child's problems, acknowledge and accept their child feelings too. It is again turbulence period for children to talk out their feelings openly in such situations. While doing these program, many children broke down in tears uncontrollably and somehow the facilitator and teachers made them feel comfort. It is evident that they have experienced such traumatic incidents and did not share to anyone else. We believe that “Little drops of water make the mighty ocean”. Through our training programs we would like to bring awareness about how to be more confident and courageous to protect themselves from the dangerous sitations. Prevention of child sexual abuse begins with 3 A’S: